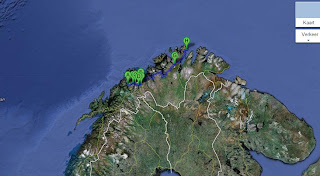 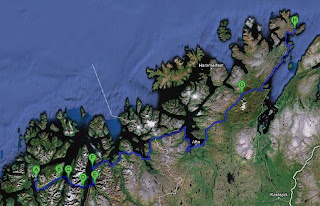 The closer you get to the North Cape the more eager you are to reach it. I knew the last 3 days I had to travel on the busy E6 on which all the tourists (a caravan of busses, campervans & motorbikes) would go, so I decided to take another two night rides, with facing hardly any traffic and again amazing light sceneries, reindeer herds crossing the roads, the Sea Eagles flying above your head and the Arctic Fox hiding from you.
But still I had to get on the Island Mageroya, where the North Cape is situated. Connected by a tunnel of 7 km length which is going down to 212 m it is an intense experience. I was already warned by other cyclists that one should better take the bus during the daytime, but since it was 03:15 in the night I just tried my luck.
In fact I tried to reach the Cape today, but after doing 130 km with a lot of headwinds, rain and hilly terrain, it was getting difficult not to fall asleep.
Now only 26 km remain to complete the tour through this "Mordor"-like landscape, with no trees in this unfriendly environment. Tomorrow I will give it a try to reach what you thought & dreamed so many times of, the North Cape. And of course on a lucky date! Friday the 13th ;-)
Yet I don't know what to expect, except for a 300 m tall mountain plateau with strong winds and probably a bunch of tourists. Cycling today to the supermarket did cost a lot of strength, even though it was only 4 km, it seems the night rides & the last weeks are virtually in your bones and your body seem to know that it more or less can relax from tomorrow onwards... 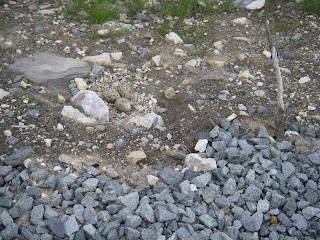 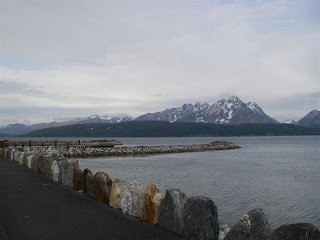 Waiting for the last ferry. On the background the highest mountains in Northern Norway. 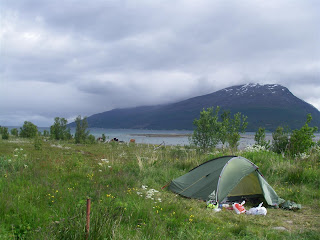 Actually I wanted to camp between some bunkers...but the way up there was to steep, but this was a quite nice alternative as well. 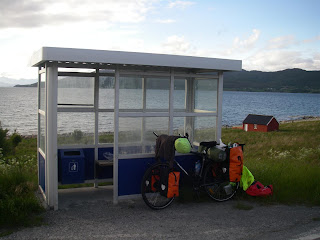 As it was getting late this day and I still wanted to go on I decided to cook on one of the few wind sheltered spots, in this case a bus stop. And I found myself lucky to share a soup and some stories... 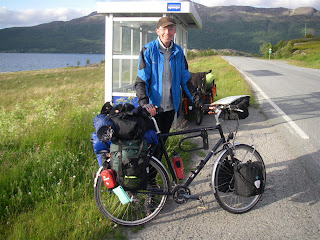 with Christian from Neu-Münster heading to Murmansk! Great meeting you. Have a good ride and good fun in Russia! 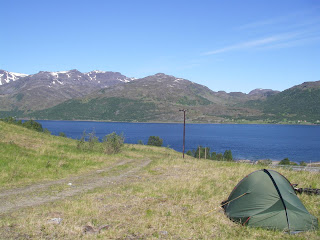 Great campsite you might think...after having put up my tent, being very tired, I noticed something must have died from the direction where the wind was coming from...did you ever smelled a roadkill? This was about the same sensation ;-) Anyways I was too tired to move everything again. 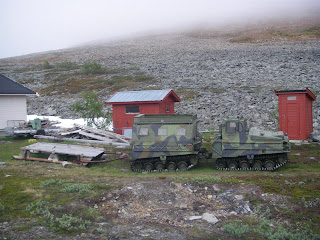 Interesting transport means. I thought this caterpillar was already awesome! But then I saw the sleigh! SO COOL! 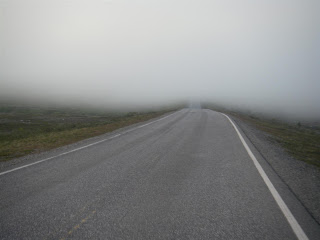 This was during the 2nd night ride. I wanted to cross the high Fjell-plateau (60 km length) during the night, when winds are less strong. Up there, you can not run for cover. 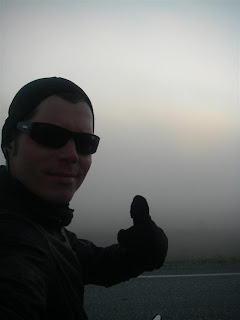 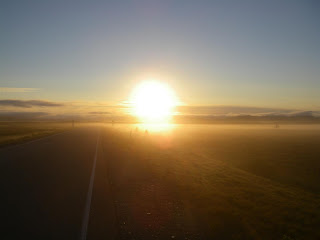 For the rest it was an awesome ride, with the setting/rising sun. Bad idea - make too many stops for taking photographs. Good idea: Bring two pair of gloves & lots of hot coffee ;-) 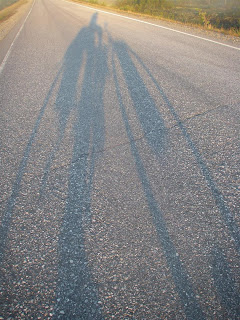 After riding through a night without sleep I feel heavily deformed in the morning. 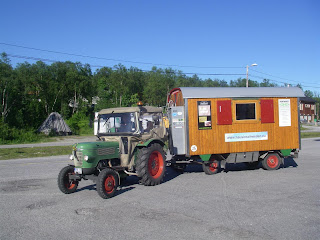 WOW! Some people just go on a tractor pulling their little house to the Cape at about the same speed as the average cyclist ;-) 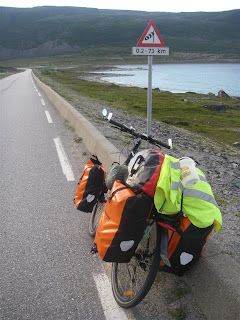 Oh yeah thanks for reminding that the windy parts just start from here for the next odd 73 km...before of course there was hardly any wind...yeah right! 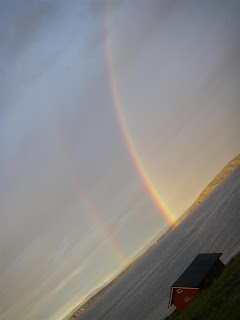 One of the things that I still can't get into my mind...rainbows at 01:00 am, this time actually they were due to rain, which got me about 5 min later. 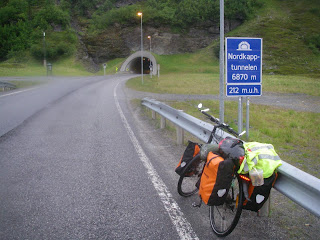 The tunnel under the Sea my worst nightmare took about 40 min. Getting down to the bottom with 9% went fast the climb up I had to get off the bike & walk. The bad air inside the tunnel, even though it was 03:15 during the early morning & there were only 2 cars and the idea of having 200 m of Arctic Ocean above your head are kind of creepy. Back I will definitely go hitch-hiking. 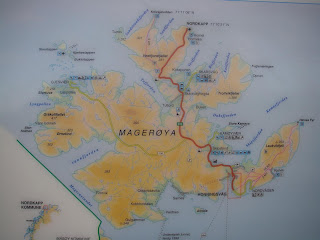 Having reached the island Mageroya, the landscape changed dramatically to no trees and grassy harsh mountains. Hard to imagine living here some months without having any light at all. The so far most hostile and unfriendly place I have ever seen. Some 26 km more & I will have reached the destination. If you look on the map you can see there is one point that is even further north and can only be reached by walking.

I will write one more time after I have reached the North Cape. I appreciate very much all the nice things, words, messages & support for the fundraising from everyone.
Cu all soon!