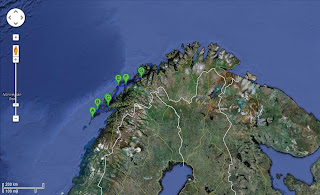 After 540 km the last days it is still 620 km through the arctic desert. 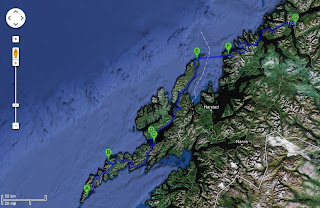 Going through the Lofotes, Vesterolen & Senja, I avoided the busy main land but added some more kilometres.

Instead of following my guidebook I took the route that Norwegian cyclists recommended me, which probably added some more kilometres to the total picture, but were totally worth doing considering the landscape, calm roads and not knowing what you would discover. 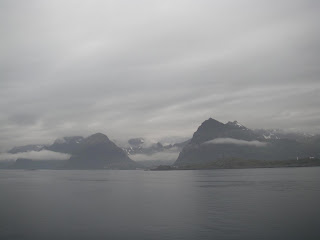 Arriving in Moskenes. Misty mountains in a land far away. The next morning the island was still veiled in clouds putting these sky rocketing mountains into a mystic atmosphere. 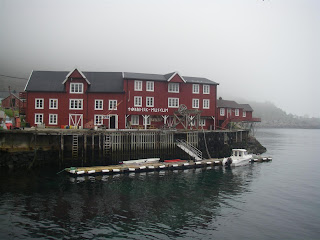 Actually it should have been my resting day, but knowing that tomorrow would be rainy I decided to continue for one more day. Still I found time to explore Mr. Larson's, who was a big trader in dried fish, to visit his neat little museum surrounded in a fish-smelling environment. 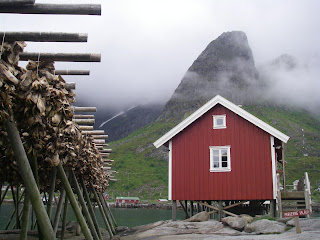 This is the basis for the existence of early settlements and still is a big income factor, dried cod fish. You find it in many places on the Lofotes and the smell of drying fish is all around you. Even for me sometimes a little bit too much, esspecially if you are looking forward having something sweet for a change. The heads are actually exported to Nigeria for a national dish, served with pumpkinseeds & cassave mash. 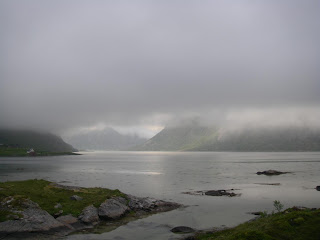 The weather changes so quickly here, that an islander said: "You know at the end of the day what kind of weather you have ...very much true. It felt like the Roman proverb, that the sky would fall on your head. 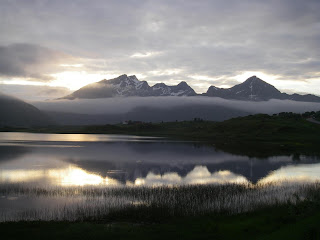 Due to the museum visit I was late on the road so I decided at 10pm to give it a try to watch the midnight sun, heading for the beach at Unstad. 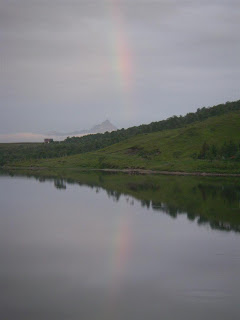 I have never seen a rainbow at 00:30 in the night and in fact there was no rain at all that day. It probably is the angle of the sun on the horizon or if anybody has any other reasonable explanation please email me! 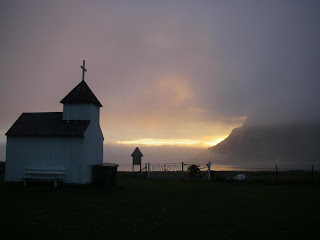 Arriving at Unstad beach I found the midnight sun just being behind these cliffs & clouds...1st try failed, but still a fantastic view. 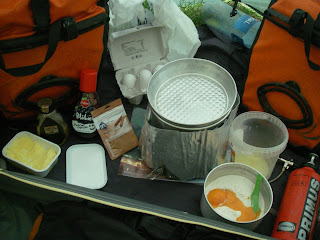 The whole day it was pouring down, so it was the perfect day to sleep, make some buckwheat pancakes and  above all don't use your legs... 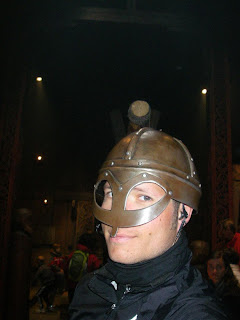 Today I was looking forward to visit the Viking Museum at Borge on the Lofoten Islands (http://www.lofotr.no/), one of the best museum I ever visited! Here they found the largest Viking house in Norway & Europe which was reconstructed together with a Viking ship. 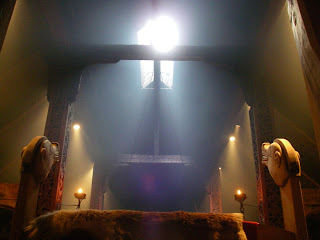 There was an open fire with soup boiling in the main hall. The detailed reconstruction & the staff in Viking garments were completing a perfect illusion. 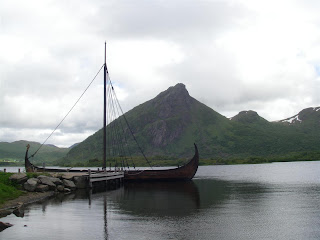 A Viking boat which could transport 100 men. You could even row the boat on the lake.... 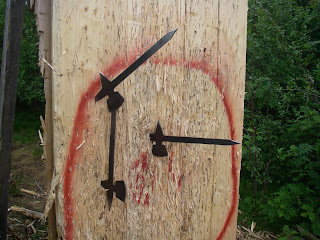 but instead I chose for testing my viking skills, throwing metal axes ;-) 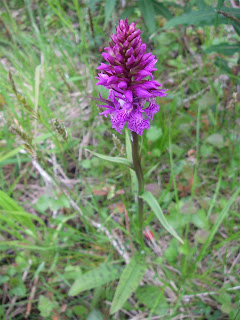 So far north and still orchids along the road. Any orchid expert here? ;-) 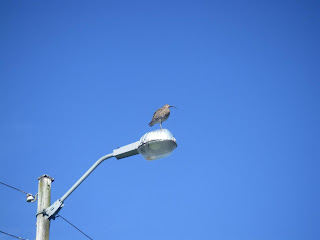 One of the so many Curlews (Großer Brachvogel) staring down at me. Funny looking birds. 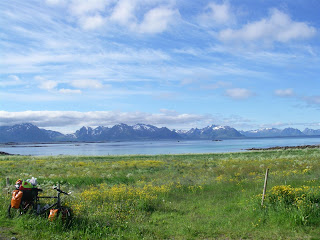 After taking the ferry to Melbu, I had a wonderful morning trip on a totally deserted road with great views. 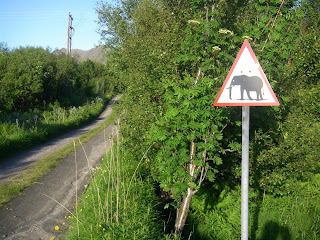 Due to the perfect weather I wanted to make another try to see the midnight sun, actually the 3rd try...I would travel for some hours along the West-Coast of the island Andoy with potentially ideal views to the setting sun. After 12 hours on the road I stumbled on this sign...watch out for elephants! It really made me doubt for a second if my eye-sight-brain connection was still functional ;-) 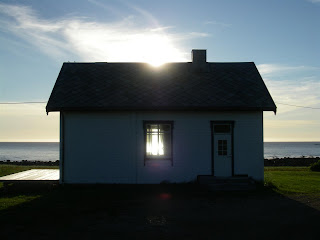 Around 8pm'ish. Still 5 hours for the lowest position of the sun. 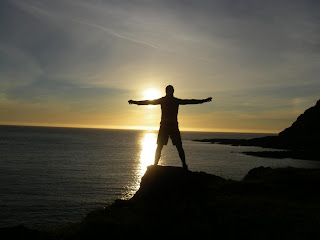 So this night I decided not to sleep at all but instead cycle through the night taking photos of the midnight sun.  And indeed this is an intense experience, pure beauty! 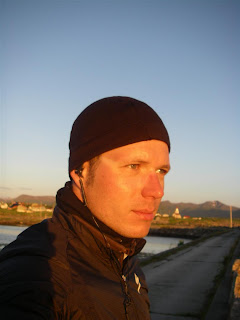 It seems you can get a sunburn too from it ;-) 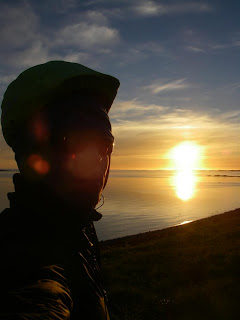 This was at 01:00 am the lowest position reached. It does get quiet cold then, but on the other hand there is also less wind...after having headwinds most of the day I was glad to cycle in this calm conditions during the night. 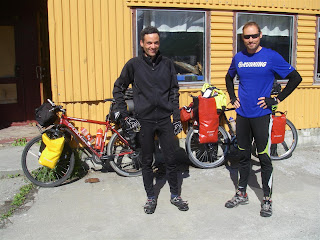 Arriving at 3:30 am in Andenes I had to wait 5 hours for the ferry leaving to Gryllefjord where I would take the first suitable camp spot and sleep for the rest of the day.... On the ferry I met these 2 guys from Serbia also travelling to the North Cape (have a look on their blog: www.cyclingnorway.wordpress.com). They are now in front of me, I hope I will meet them at the Cape! 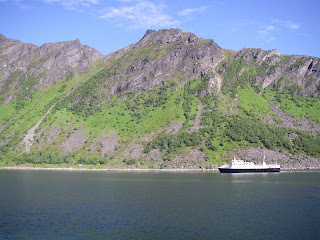 Gryllefjord & the Island Senia, a very beautiful part of Norway and less touristic than the Lofoten. The ferry was an old style boat riding the waves & jumping up and down.... a bit too much for having after breakfast. 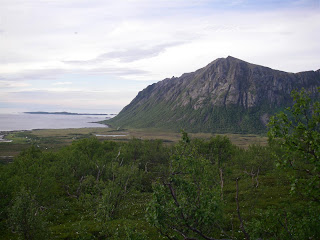 Arriving totally exhausted after riding 193 km without sleeping, I put up the tent on this nice ridge & as I did some hours later it started to rain throughout the night...just on time...I slept 16 hours.... 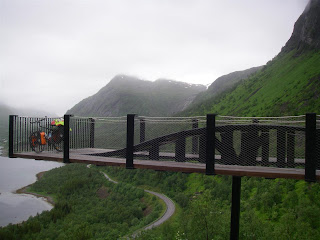 And suddenly the road ended in the sky! :-) Nice artwork & viewing platform on Senia. Amazing view! 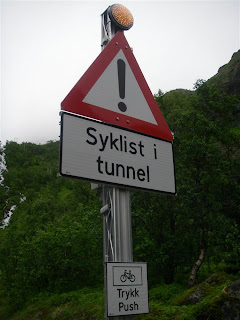 What a good & simple solution for bike safety. Before going into a tunnel you push the button & the lamp will flash warning drivers! 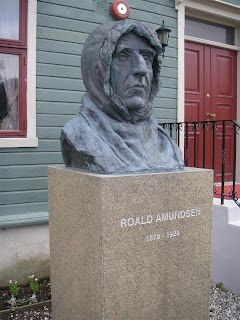 One of the greatest outdoorsmen and Norwegian national hero Roald Amundson. 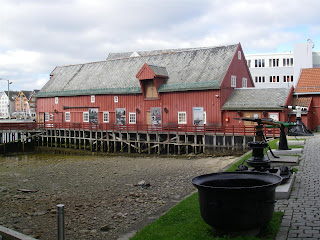 In Tromsö I took a ride around the city, beautifully set on an island and surrounded by snow covered mountains, it is one of the most impressive locations for a town. For a half year you can go skiing here, where everything is covered in snow. I visited the Polar Museum, a great museum esspecially if you are interested in the polar explorations of Nansen & Amundsen with many original artefacts. 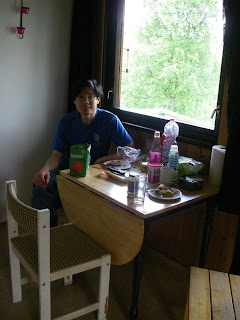 My warmshowers' host Vincent having breakfast together. Even though he had to work as a doctor in the ER-department of the hospital, the last evening we had a great BBQ with friends of him, with chocolate bananas & pineapple. Yummy!