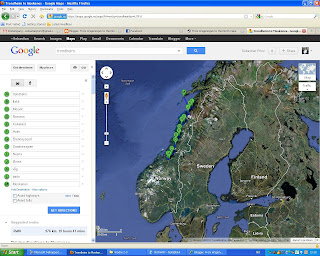 Unfortunately I could not use my Laptop and get a better route overview.

After riding the last 8 days in a row covering 983 km I decided that I deserved a resting day. The really good weather conditions and stunning landscapes along the coastal road did not offered any reason to stop, but instead enjoyed the ride until Bodo where I took the ferry to the Lofoten Islands. 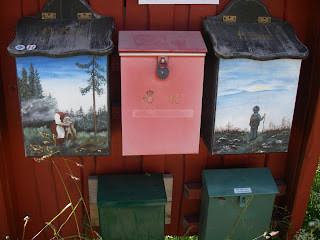 One of the so many mail boxes along the road put into a little art-masterpiece. 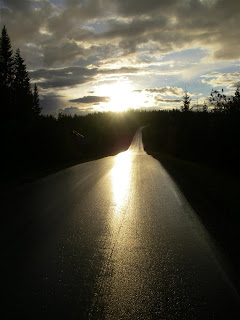 The bad news...it rained on the late evening, the good news you get a golden road riding towards the setting sun. 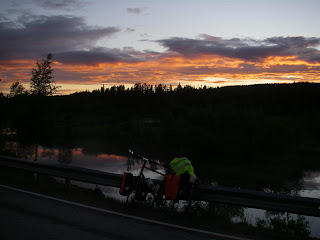 Beautiful colours during dusk/dawn (is there a Scandinavian word for?! since it seems to be just one gloomy phenomenon) 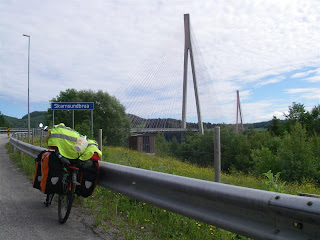 Island hopping on a perfect road, a perfect bridge and perfect sunshine. 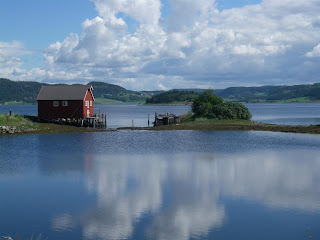 It seems that every Norwegian family owns one of those little cosy cottages to enjoy the Outdoors. 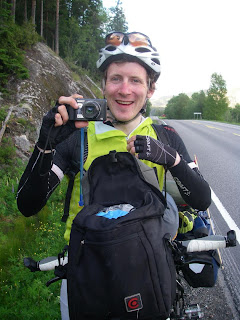 Meeting the first touring Norwegian, unfortunately in the opposite direction. Even though there were billions of sandflies around we had a nice and rather long chat exchanging route information. He is riding with Tourettes' Syndrome, have a look on his web-blog (HELTPAAFELGEN:NET - "Aross Norway with Tourettes Syndrome). Have a good ride! 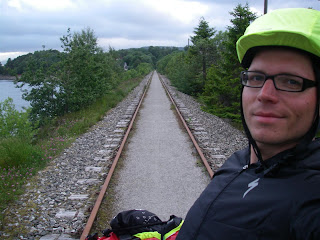 Asking my way to the campsite in Namsos (which was ridiculously expensive) I was advised by a local to follow the old rails. Very nice riding going like the A-train. 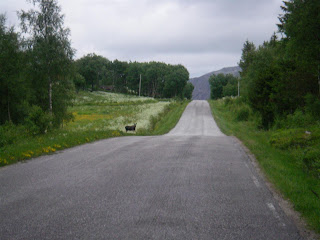 Finally my 1st shot of a Moose! It was actually the 2nd one that day. I found it very difficult to get a closer picture, they are very shy animals and hunting does not help much either. The other one that day I thought there was a cow hiding behind a traffic sign until I saw it crossing the road with its impressive antlers. 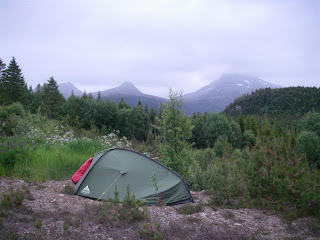 I thought by myself, 'Wow what a great wild campsite!', until I discovered the thousands of lillte sandflies eating me alive. 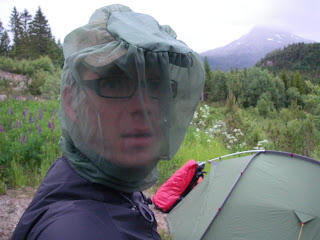 I decided not to cook this night and just have another portion of porridge. It took 30 min. to kill 95% of all little buggers in my tent...but still 5% can make a significant difference to your night's rest...look at the terror in my eyes ;-) 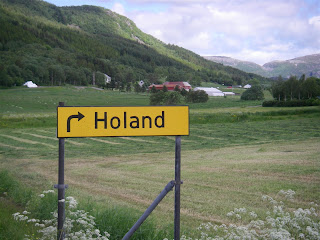 After a short night I found a shortcut back to Holland! ;-D 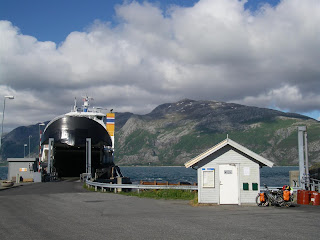 Today I had to take 3 ferries. For the 3rd ferry I had to hurry, but after making it I was extremely lucky that evening.... 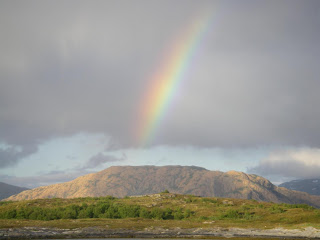 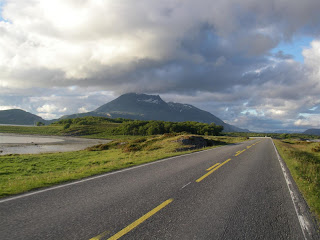 and observing  3 Moose with a gorgeous evening light on a deserted road. I found riding after 8pm - 12 pm the nicest part of the day, when the roads are calm, the lights are spectacular and the wind is slowing down giving everything an unreal atmosphere. 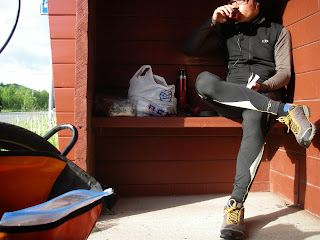 Breakfast and hot coffee sitting in one of the bus stops, out of the wind & in the sun mornings can be good. 5 min later it rained... 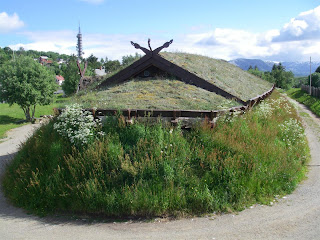 A neat viking house along the road reconstructed. Unfortunately it would open from 3 hours later when I arrived. 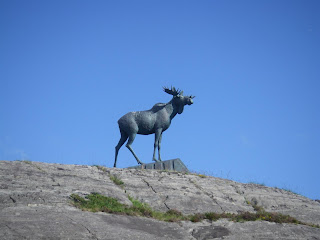 The moose in full glory! What an animal - the body from a cow, with giraffe like legs, a giant head and antlers where you could put a hammock in between...or in words our Prof. described it "It seems when God created this animal, after creating all the other creatures first, he just used all pieces that were left." So true ;-) 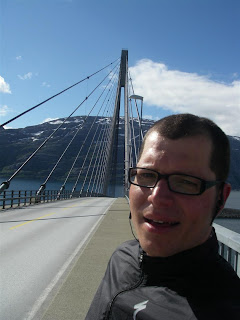 The largest bridge so far...luckily there was a pedestrian path to cycle on. 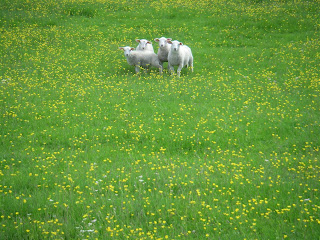 If you get bored talking to your bike & yourself, there are still sheep to communicate with. 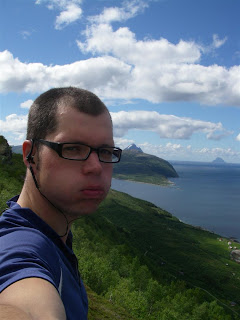 I thought there were no mountains anymore! One of the last higher climbs on the last more "flatter" parts of the road. This road would take you all the way into the fjord just to cycle it back on the other side. For lazy people there is an early ferry crossing the 2 km fjord instead of doing 70 km around it. But for this view it was pretty much worth doing! 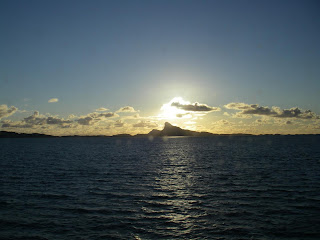 The late ferry to Jektvik where you pass the Polar Circle, from now on there is only 'Day' - the sun is not setting under the horizon anymore. 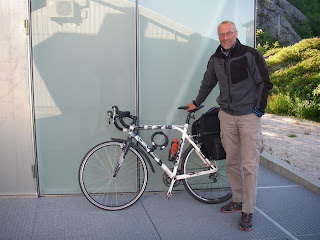 I arrived at the Jektvik ferry terminal very late and tired after 144 km...finding this heated waiting room totally empty, so I decided to stay the night there to sleep & leave early to get the next ferry on the other side of the island. At 1:30 am I got a visitor. Carl Georg a Norwegian teacher & cyclist with whom I shared the waiting room for a short night's rest. Great meeting & talking him. I hope his knee is doing fine again! 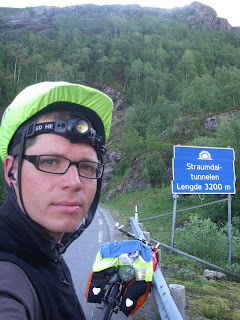 After leaving the nice warm resting room it was kind of cold leaving at 6:40 in the morning. Here the so far longest tunnel awaited me, nice cold & wet. Fortunately with no traffic at this time, it is kind of ceepy to get through these artificial tubes - it feels a little bit like travelling to the inside of mother earth. 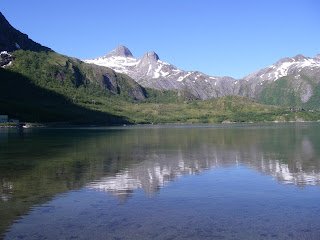 What a perfect day again! No clouds and clear blue sky. 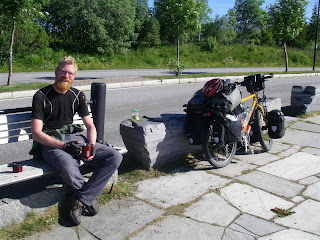 At the ferry I met the 1st German cyclist also heading to the North Cape. Stefan from Freiburg (www.showmetheworld.net). He is since April on the road heading towards Russia and further...without a final destination nor timeframe yet. You can pay him on his website to go to a destination. Great meeting him & hopefully we will meet on the road again! Safe travels! 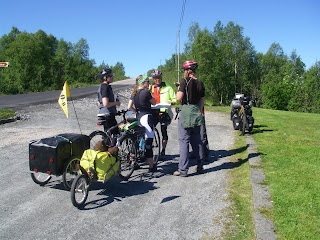 What a busy day with touring cyclists! This day I met about 10 people, mostly heading the opposite direction. Two other Germans from Stuttgart, one older guy on a Pedelec Stefan and I met just some km after the ferry discussing with 2 Norwegian Girls that just came from the North Cape (they did it in 9 days from there!) about the route and equipment. 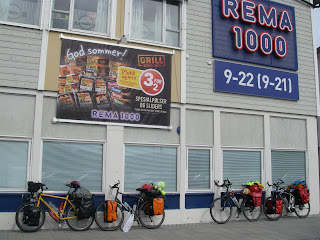 This is what you are looking for & where nearly all your dreams come true. REMA 1000 - the supermarket with relatively low prices, big choice & even spelt bread! Heaven! 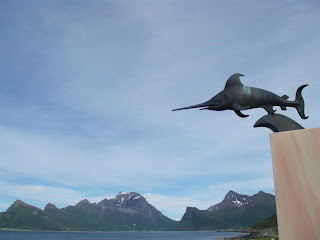 Monument for British marine soldiers who died on a submarine.

Day 30 - Vag - Moskenes (7 km) - Resting Day
I cycled 3000 km in the past 28 days and 1000 km are still in front of me. I crossed the mountains of Norway and now have to face the fierce Northern Winds until the North Cape. I personally think this last quarter will become the hardest with the lowest population density (1,5 people/km2), rough weather conditions and low temperatures. But having made it until here in a good time, I saved some extra resting days that I might need in case the weather turns bad.

The next blog I will probably write from Tromso in a week.

Thanks for all personal support & for funding PhilinCon's work in the Philippines to save the last remaining rainforests with its unique flora & fauna. In case you want to support the charity fundraising just click on the link on the top of the page or contact me if you want to know more.

All the best & I hope you get still a good summer back home!